At first glance, the Philips Hue Beyond Ceiling lamp embraces simplicity yet upon further inspection, it becomes evident that the design is the only simple feature that this LED smart light has to offer. The lamp's ability to interact with smart devices leads to a complicated setup at a baffling price. 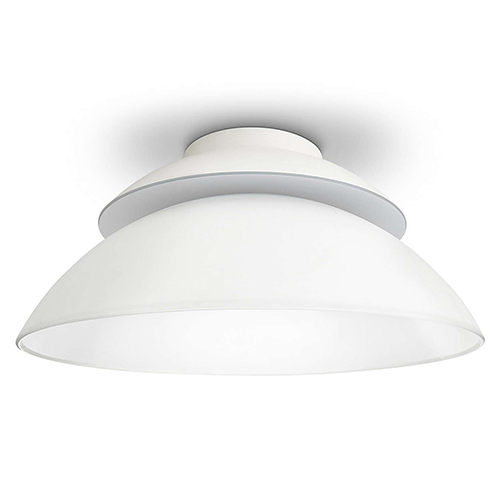 THE GOOD / The Hue Beyond Ceiling lamp has a versatile and clean look which looks as if it belongs in nearly any environment. The lamp also utilizes current technology to interact with home automation devices while also creating an enormous range of colorful and white lighting effects on both ends of the spectrum.

THE BAD / The overall aesthetic design and materials used to construct the Hue Beyond Ceiling lamp are of average quality despite a high-end, luxury price tag. As for functionality, setup is complicated at best and the exclusion of manual knobs and buttons seems to further complicate the utilization of the lamp.

THE BOTTOM LINE / Philips Hue Beyond Ceiling lamp looks more like a typical light fixture than the tech-savvy piece of equipment that it is. It enhances the home automation experience by providing lighting that is interactive with other devices as it was designed to do. The quality of the hues created by this pricey lamp, however, is up for debate. Ultimately, the hype over the lamp seems to fade rather quickly, landing the Hue Beyond Ceiling lamp on the list of modern technology fads.

As far as light fixtures adhered to the ceiling go, the Hue Beyond Ceiling lamp appears to be a rather generic one based on appearance alone. The lamp shade is a modern, simple dome shape which is crafted from frosted white glass. The style and color are surprisingly versatile and because of its simplicity, it can easily be incorporated into numerous home decor themes. Whether mid-century modern, industrial or traditional, the Hue Beyond Ceiling lamp does not feel misplaced.

With a dimensions of 7.9 x 17.7 inches, the size is also fairly standard. While some may prefer for their light fixtures to blend in, one would expect a fixture in this price range to offer either extraordinary quality or superb design yet it fails to deliver either. Overall, the Hue Beyond Ceiling lamp could easily be mistaken for one of the least expensive light fixtures in a local hardware store. 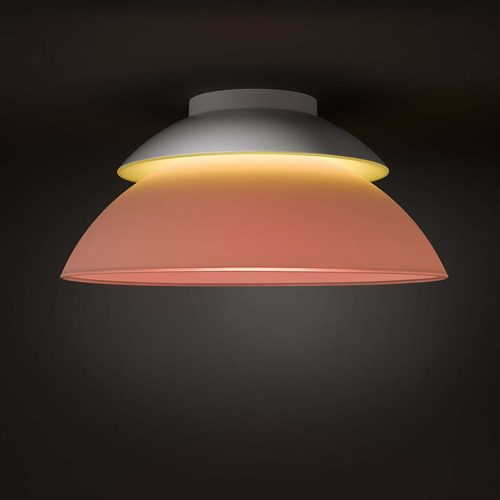 Philips Hue Beyond Ceiling lamp arrives needing little physical assembly. As it is a ceiling lamp, however, it does need to be properly secured to the ceiling. The instructions for installation provided feature a few less than helpful pictures so if you are unfamiliar with ceiling lamp installation, this process may be complicated. If this is the case, work with a partner to ensure that the glass lamp shade does not break during installation.

To power the Hue Beyond Ceiling lamp on and begin using it, you will need a Hue Bridge (a separate device that is not included). The Hue Bridge is an additional cost and is necessary to connect to the Philips Hue app which controls the lamp. This portion of the setup is rather complex and frustrating, however once it is completed all that remains is to download the app with any iOS or Android device. From there, the remainder of the process is mostly automatic. 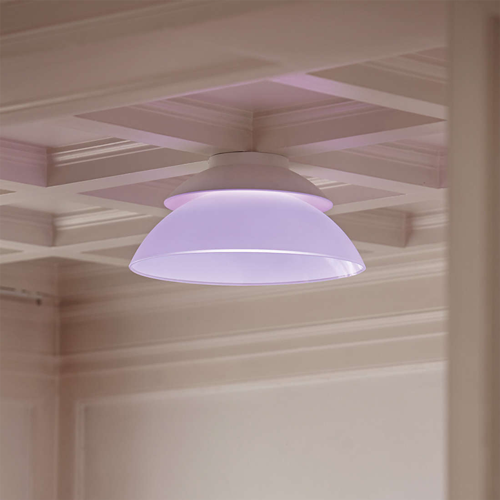 The technological aspect of the Hue Beyond Ceiling lamp is certainly its main selling point. It is a smart, LED powered lamp which is capable of producing 16 million colors though there have been many widespread complaints about the quality of blue and green hues displayed. Naturally, a light with this ability requires more than the flip of a light switch to operate. The Hue Beyond Ceiling lamp has no manual controls and instead is controlled only by the Philips Hue app which is less than ideal.

Aside from the total app control gimmick, the lamp can also be synced to interact with music, television shows or even social media accounts using IFTTT "recipes". Fortunately, if you are on track for full home automation, the Hue Beyond Ceiling lamp works with Apple HomeKit and Zigbee Light Link. With some programming, the lamp can also be controlled by voice assistants such as Amazon's Alexa and Apple's Siri. 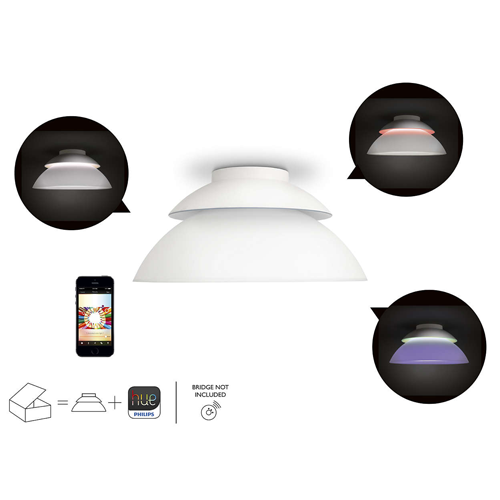