Whether the sun is just beginning to rise or moonlight is signaling the day's end, the Philips Hue Phoenix wall lamp has an adjustable white light hue to reflect your mood. The lusterless design of the lamp along with the faint glow produced by the beam itself, however, do not exactly light up a room. 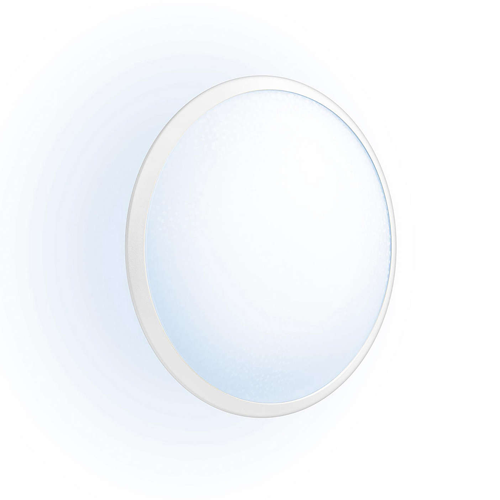 THE GOOD / Philips Hue Phoenix wall lamp is equipped with a wall mount that is a convenience many can appreciate, along with the lamp's unornamented, contemporary aesthetics. The lamp also offers all of the advanced features that have come to be expected including customizable light, IFTTT recipes and voice control potential.

THE BAD / Although the lamp highlights smart technology, it does not offer anything that is above average quality in this aspect. The white light produced is also muted which leaves the lamp to be interpreted as a trendy mood lamp rather than a functional primary lighting solution as advertised.

THE BOTTOM LINE / Although not a high-quality, showcase piece, the unembellished look of the Philips Hue Phoenix wall lamp allows it to blend in seamlessly. In general, the lamp allows for a myriad of white light hues yet the dull illumination it furnishes is impractical for every day, operational use. In combination with its lack of concrete controls and ordinary smart lamp technological features, the lamp is unfit for use as a predominant light source and is much too expensive to consider as a trivial piece.

Measuring in at 5.8 x 11.8 x 11.8 inches, the Hue Phoenix lamp is well-suited for cozy spaces such as bedrooms or offices. The lamp is mounted directly to the wall like a decorative wall scone. Equipped with a built in mount that is similar to the back of a typical smoke detector, this attribute is hidden from sight when properly attached to the wall.

The front of the Philips Hue Phoenix wall lamp resembles a singular, rounded headlight found on classic car models. It is white in entirety and features a 3-D frosted white pattern made up of small hexagons on the top. The 3-D pattern is unnoticeable from a distance though it is the only physical trait that separates this wall lamp from less expensive plastic models. For some the unremarkable model is a letdown, although those that embrace contemporary, modern or minimalist schemes will find that this wall lamp is well camouflaged amongst similar furnishings. 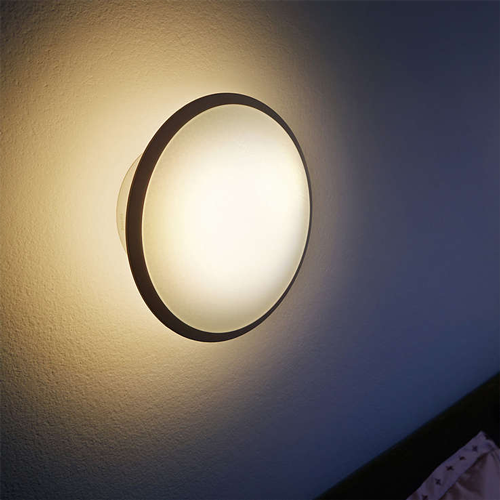 In the box, the lamp is well protected to prevent damage during transit which makes removing it from the packaging somewhat of a hassle. Despite the initial hassle, further assembly of the visible portions of the lamp is smooth directly out of the box. Moving forward, the lamp must be mounted to a wall. The mount is attached to the back side of the lamp although tools and additional hardware are not included.

For the lamp to be controlled, you will need a compatible bridge device. A bridge is not included in the box so setup will warrant another purchase. The cost of the bridge will vary depending on whether you choose the Hue Bridge, an entire Philips White Ambiance Starter Kit or another comparable device. Connecting the lamp to the bridge takes time and patience although once it is connected, all that is left is to download the Philips App on your smart phone or tablet. The app will locate the lamp and the two will sync up to complete the setup. 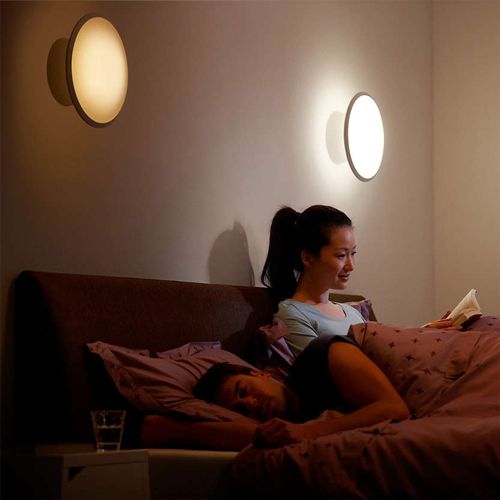 Through the use of the Philips Hue app on a smart device with Android or iOS operating systems, the Hue Phoenix wall lamp provides a subdued but customizable white light. The controls are easily navigated, allowing for 50 thousand hues of white light to be displayed through the lamp's 9 WATT LED engine. Cool white light creates an energizing atmosphere while a glowing warm white hue is conductive to a relaxing environment.

Aside from an abundance of white hues, IFTTT recipes allow you to configure light combinations to notify you of everything from the weather outdoors to incoming phone calls. Zigbee, Wink, Apple HomeKit and voice automated products, such as Apple's Siri and Amazon's Alexa are compatible as well, offering plenty of synchronization choices for home automation product users. For a smart lamp, however, these tech-friendly features are average and expected. 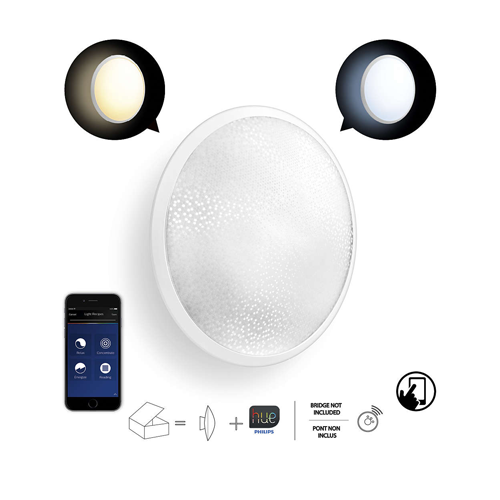